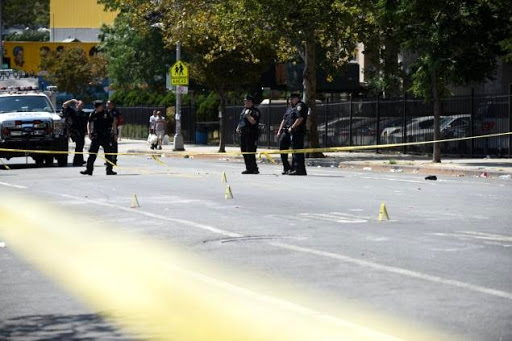 Gov. Cuomo, speaking at the funeral of his murdered aide Saturday, urged Washington Democrats to shut down the government until they get a gun control bill that works.

The governor gave an emotional eulogy at Carey Gabay's funeral at the Emmanuel Baptist Church in Clinton Hill.

He told the dozens of mourners that the 43-year-old's death from an errant bullet fired in the wake of a Labor Day J'Ouvert celebration in Crown Heights was "one of the most tragic pointless examples of the rampant violence that is spreading like a cancer through our society."

"His murder showed a disrespect for life so base that it didn't even care who it struck down," Cuomo said as Gabay's widow Trenelle Gabay and his mother Audrey listened intently from the front pew.

"The violence has become so brutal, so aimless, that the most innocent can be struck down anytime anywhere."

He also called upon his fellow Democrats in Congress to shut down the government until they get an iron-clad national gun control law passed.

Gabay, a Harvard-educated son of Jamaican immigrants who was recently named first deputy counsel to the Empire State Development Corp., was the victim of a gunfight between three rival gangs that erupted on Bedford Ave. about 3:45 a.m. Sept. 7. Gabay ran between two cars for cover but a stray shot hit him in the head.

After being declared brain dead, Gabay was taken off life support Sept. 17.

"He never saw the shooter, he never knew what caused the gunshots - it was purely random," Cuomo told reporters after the service, adding that Gabay had "a smile that lit up the state of New York."

Gabay's widow and family declined to speak to the press.

"The gun violence in this city, in this state, has gotten out of control," Cuomo said. "The fact that our governments do nothing about it is unforgivable. It really is unforgivable"

The gunman who killed Gabay remains on the loose.