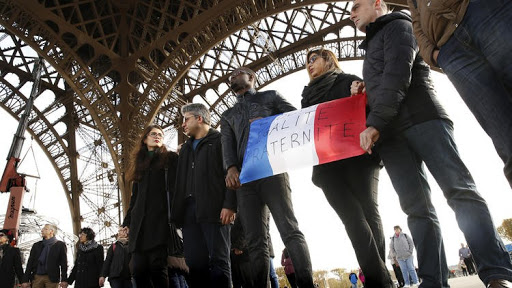 Americans watching the horror in Paris should thank the National Security Agency and the nation's terrorist-watch establishment for keeping us generally safe from such attacks in the 14 years since our 9/11 nightmare. Even those who decried the NSA's massive data-gathering operations, as revealed by Edward Snowden, should feel some measure of gratitude for the thousands of anonymous, law-abiding NSA employees who keep an eye and an ear on things from inside that big, spooky building in Central Maryland.

I assume that terrorists consider citizens of Western societies to be high-value targets. I assume the hatred that fuels terrorism to be a hatred without end. I assume we will always need to be vigilant. So, if someone doesn't watch and listen for attacks, more of us will die.

That might all seem obvious, but Americans go months, even years now, without thinking about it. We might have mass killings committed by our own citizens with guns, but the nation certainly seems to be a lot more secure from outside attacks than it was before September 2001.

The killings in Paris, reportedly carried out by elements of the Islamic State, take us back to the issue of government surveillance and how we balance concerns for public safety with respect for privacy and human rights. I find a direct parallel in the current American conversation about police and citizens: It's not that we hate cops. We need them. We want them to protect us. We just want it done legally.

Snowden, who worked for an NSA subcontractor, revealed a top-secret, bulk data collection operation by the agency in collaboration with major telecommunications companies. The operation systematically intercepted millions of phone calls of Americans as well as Europeans, including the capture of more than 70 million calls in France alone. The French and other American allies were outraged.

Other documents from Snowden showed that the NSA had spied on world leaders and foreign governments. We also learned about NSA collection of email and text messages. It was a pileup of revelations about what the NSA had been doing in the name of national security since 9/11 and the passage of the Patriot Act.

In June, Congress addressed the abuses by reining in the NSA's power to collect phone records en masse. The agency still has surveillance authority but with more restrictions.

While Sen. Rand Paul and other civil libertarians believe the government retains too much surveillance power, most Americans seem comfortable with having a national security apparatus focused on terrorist threats. After 9/11, having a skilled, motivated, well-paid workforce at NSA and other intelligence agencies made more sense than, say, carrying out the costly war in Iraq. But allowing the NSA to make grand sweeps of phone records, domestic or foreign, was something most Americans, however traumatized by 9/11, would not have endorsed.

This is where I see the parallel with the domestic crime fight in the United States. Let me bring it home to Baltimore.

Every year in the 1990s, Baltimore police reported 300 or more homicides, and this even as the city was quickly losing population.

In 1999, weary from a decade of violence and open-air drug markets, Baltimoreans voted for a mayoral candidate who promised a renewed and vigorous battle against crime. His name was Martin O'Malley. He was the strongest of three candidates and he had the clearest message.

So the new crime fight commenced, with a zero-tolerance strategy that had police clearing corners and arresting people for so-called quality-of-life crimes. The police made thousands of arrests, up to 100,000 in a single year.

The rate of crime started to fall, as it did in other cities, and many people started to feel better about life in Baltimore.

But, by the time the ambitious O'Malley headed for Annapolis as Maryland's new governor in 2007, others believed his strategy had gone too far. A new mayor and police commissioner sought to change the strategy; they supported the targeting of the most violent offenders over mass arrests. The city eventually paid $870,000 to settle a lawsuit that alleged numerous arrests without probable cause during the O'Malley years. It agreed to retrain police officers and to publicly reject zero-tolerance policing.

Since then, Baltimore taxpayers also have paid millions to settle lawsuits claiming brutality by our police officers.

In April, the whole world saw an outbreak of lawlessness in West Baltimore following the funeral of Freddie Gray, who died from injuries sustained in police custody. O'Malley's zero-tolerance strategy was cited as one of the reasons for the poisoned relations between Baltimore's police and many of its citizens.